skip to main | skip to sidebar

Read about the RSA Networks event - see the videos

Information about RSA networks and OpenRSA here. More about this blog, and how to join in. 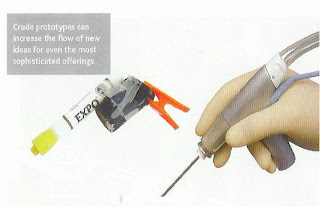 One of the most interesting things I got out of the book The Ten Faces of Innovation by Tom Kelley (Ideo) was being brave with emerging ideas. His great example, pictured above, which I often use is the surgeon’s tool which started life with someone leaving a long and tiring development meeting and returning with a prototype made from pens and other stationary taped together very crudely.

Rowland Harwood’s observation about NESTA’s view on innovation and the RSA 360 project: ‘Good innovations don't just rise to the surface naturally without the momentum of a wider community of advocates’ also points to a creative climate which is created purposefully.

Sir Ken Robinson - also a RSA Fellow, describes in Out of Our Minds:

‘Creativity prospers best under particular conditions, especially where there is a flow of ideas between people who have different sorts of expertise. It requires an atmosphere where risk-taking and experimentation are encouraged rather than stifled. Creativity flourishes when there is a systemic strategy to promote it’

Reflecting on the RSA’s process recently I was struck by the fact that the process of exploring how the Fellowship becomes a force for social innovation has been conducted in an exemplary manner in the sense of creativity. The new RSA Network’s blog has had an open conversation from the beginning, and the RSA continues to do this very strongly on this blog as Saul is posting daily developments on the prototype as it develops. This also included a face-to-face meeting with Fellows to see the progress so far last Friday. There is a continued sense that this only has a chance of working well with everyone's input.

If some of this innovative environment can be created deliberately through and around the new site, where everyone feels safe enough to post ‘emerging’ ideas for multi sector and discipline collaboration then we really would be justified in feeling as excited about the possibilities as we all obviously do!
Posted by Tessy Britton at 10:09

Part of the OpenRSA initiative to support re-invention of the RSA, led by Fellows. More here.